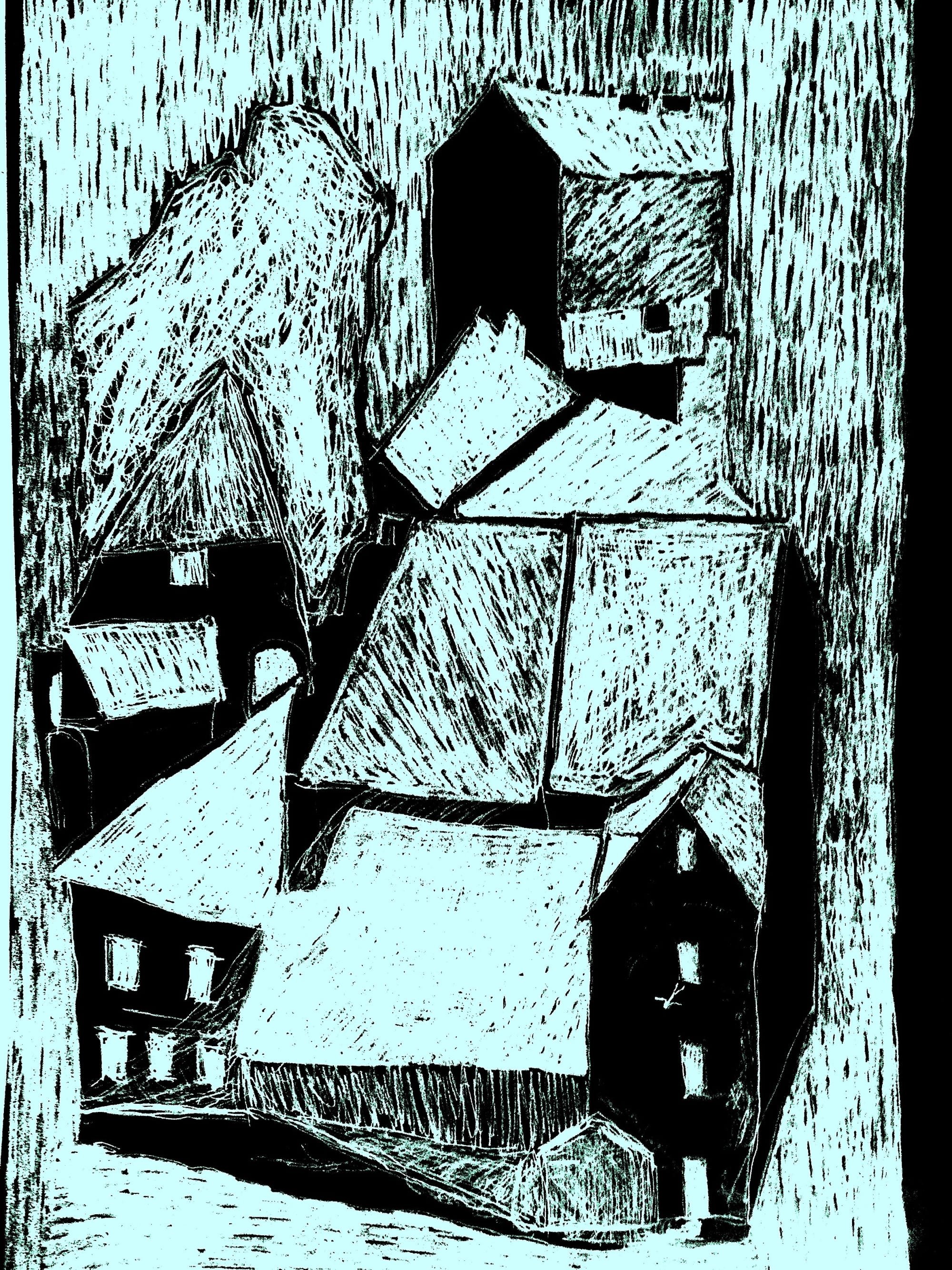 The blind girl wasn’t the woman at the table with the tumor. The woman at the table leaned across. His mother was there. She – the mother – might viciously tug his hair from his scalp on other occasions. Here she changed her appearance by running everything at another pace. What she suppressed and abnegated meant she was, to Johnny, an altered shape. She was torn out of the usual. It was not always easy to recognize her. Johnny sat and watched them at the table as if wrenched together. There was a very personal manner. There was nothing but an imaginary space. The ambience was sparse with sharp lines. There was a strong classical stream. There was a miraculous poise between bodies and souls, symbols and realities. The mysticism was a matter of solid clarity and history bound to a new movement. The stillness was between that of prayer and thought. There were also sinuous Gothic forms. The starkness of the women’s serenity was unaided by mental suffering. A long time elapsed. Remnants of previous content only intervened elusively. It occurred to him that maybe all this was about making a fresh start. The blind girl and the tv set and the babysitting was some time before this scene.

'I have a bad habit of conflating,' thought Johnny with a grin.

He inherited so much neutralization. He had to live with a low-key awareness or else would lose equilibrium. He remained largely unknown.

He made fires in grates. He crisscrossed the wooden kindle-sticks on the lightly screwed-up newspaper balls. He delicately applied coal. He was always cold. He chewed all his food. His mother watched him like a third source. He walked up the lane to school. A miner punched his face and threw his book over a hedge. A boy tried to trip him as he went through the playground. A girl didn’t blink as she watched him. He failed a test. He failed another. He failed to complete a task in the designated time. He didn’t understand what it was about. He was relieved that he was ignored in the canteen. He stayed late in the library . He walked home down the lane listening to rooks. He sat in a field and read his book. He chewed his food. Reegan made a totality of show near the greenhouse and belted him with the plastic hose-pipe. He slept on his front to avoid getting blood on the sheets. He watched the moon. He heard insane tawny owls by bleak lodges. At weekends he did his internment babysitting for cash. At no point did he contemplate suicide because he felt there was nothing left to kill that would have been of any interest. In short, the defence against the animal, the non-human, against aggression and horror required more than oblivion. He had the typical hang-up of seeking redemption through lowness.

But later on, one lunchtime, he heard talk on another table. A barn had been burnt down in the night. One of their gang was missing from lessons. They were abstracting sinister connections. They were touching ancient forms. Their talk was all too late. The missing was never more than a disintegration done as mannerist clinging. Nevertheless there was a deeply felt transfer happening. Johnny oserved how their eyes flickered glances around the room. They were like vivid bugs dreaming of heaven. This was a time to test themselves. They looked a little ashamed. They felt bigger in Johnny’s eyes. It was as if right there, as they contemplated the missing, they were getting right into something else. It was a reversed opening. There was a traumatic thing crawling around. It was as if they had seen a row of sheep being slaughtered. Johnny thought about them for a long time after with some kind of affection. In this mood, he reflected, they were beautiful and dangerous. You could think about their eyes for a long time. It was as if they were in touch with suffering. And it wasn’t just their own. Well, Johnny loved anyone who could do that. He began to think everyone had the ability but sometimes were too scared. Or else didn’t conjure things correctly. Looking at them there he was looking at an endpaper. They were all different but only like a row of bees.

'To replicate that mood and sensibility in a different environment would be a worthy ambition,' thought Johnny.

'Perhaps things will be on a smaller scale now,' thought Johnny.

'Some environments are not blessed. They are more like wallpaper,' thought Johnny.

There was a whole bunch of thoughts popping up front and unforced. As if a full scale download was floating simultaneous magical tricks from the scene. Later that day he walked away from school slightly less than full scale. No one paid attention. He heard that the missing boy had hanged himself. Someone had gone to his house to look for him. Looking through the postbox, he was hanging down from above. It was then that Johnny knew that there was a lot going on. Some things were very far away from interiors. As if purgatory was three miles north. The spaces and colours were a little bigger. When he walked at midnight past the coking plant he stared at its great transience, its unacknowledged scope. He listened to the dark machines from somewhere inside courage. There were silent pools surrounded by chicken wire. These were prosthetics of dread. He trembled all the while. Something undoubtedly was very wrong. Some kinds of animation stirred up one long blur. He was going through a range of highly processed material but treating them as if raw. There were hellish memories. There was no nostalgia. You can catch a feeling of time when you’re young. It does you proud if you forget. Or never knew. Johnny doesn’t do either.

There is a constant atmosphere of anxiety and fear. There was something about large eyebrows that crept into disturbing dreams. The white house was in his bloody head. He was in the white house. The hanging boy at the gauze and wire table floated above his own hands that are like curtains. Everything might be happening indoors but its murky so who knows? That’s his shape, thought dreaming Johnny. There’s a phenomenal set-up of textures. Someone keeps turning the light on and off. There’s a whole other world. These are starting worlds for distortions. Johnny was keen to distort. He saw it as bending things back. Things get wider then something’s bound to come out. Would things get lost? Well, subtraction isn’t always a loss. Huge cosmic forces were fighting others. Johnny faced his huge decisions with an unstable alphabet, a bookmark, a cornfield, a coal mine and bonded inventories. His lists were more than trembling revolts. They seemed to fall out of space. 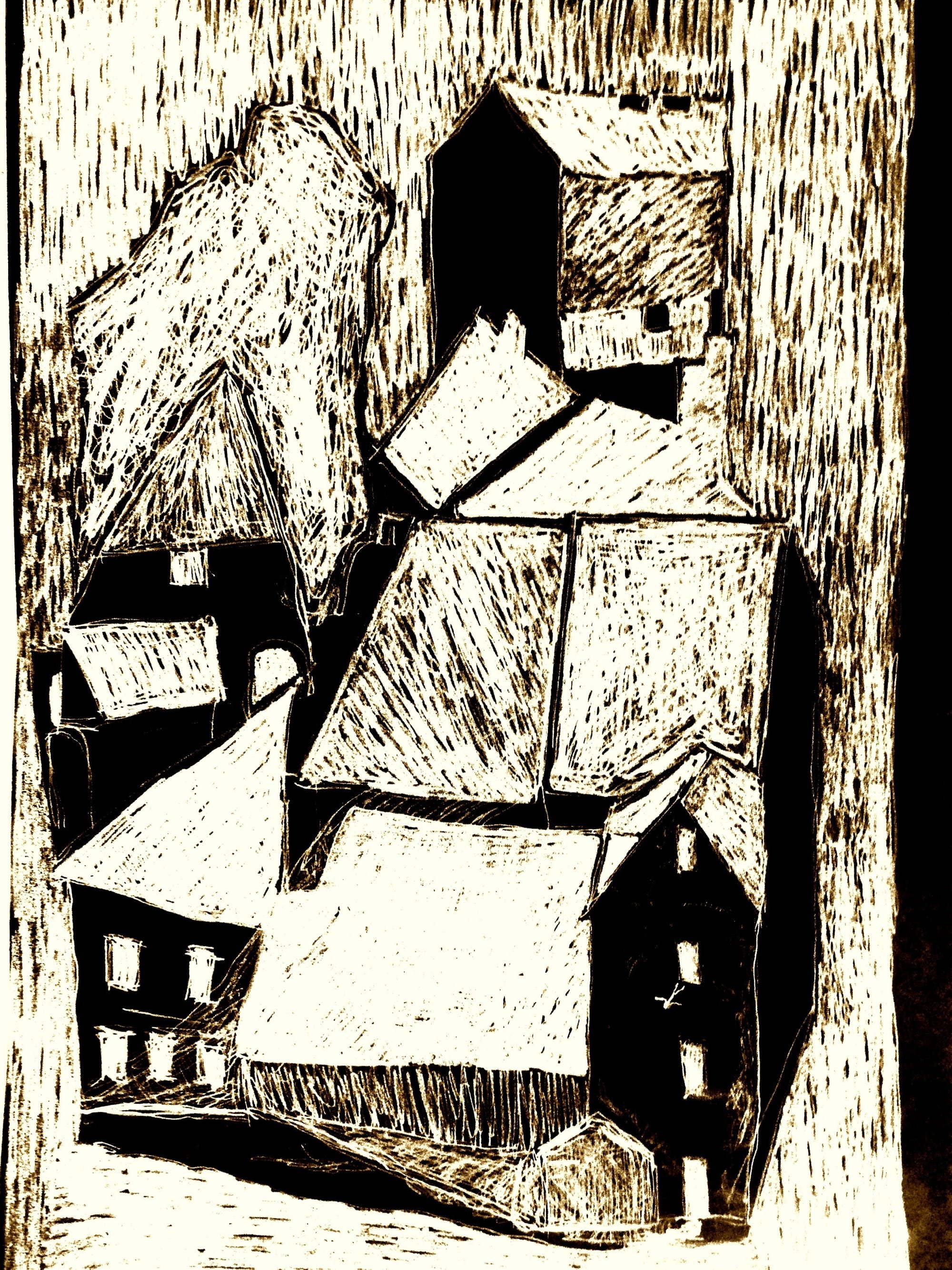