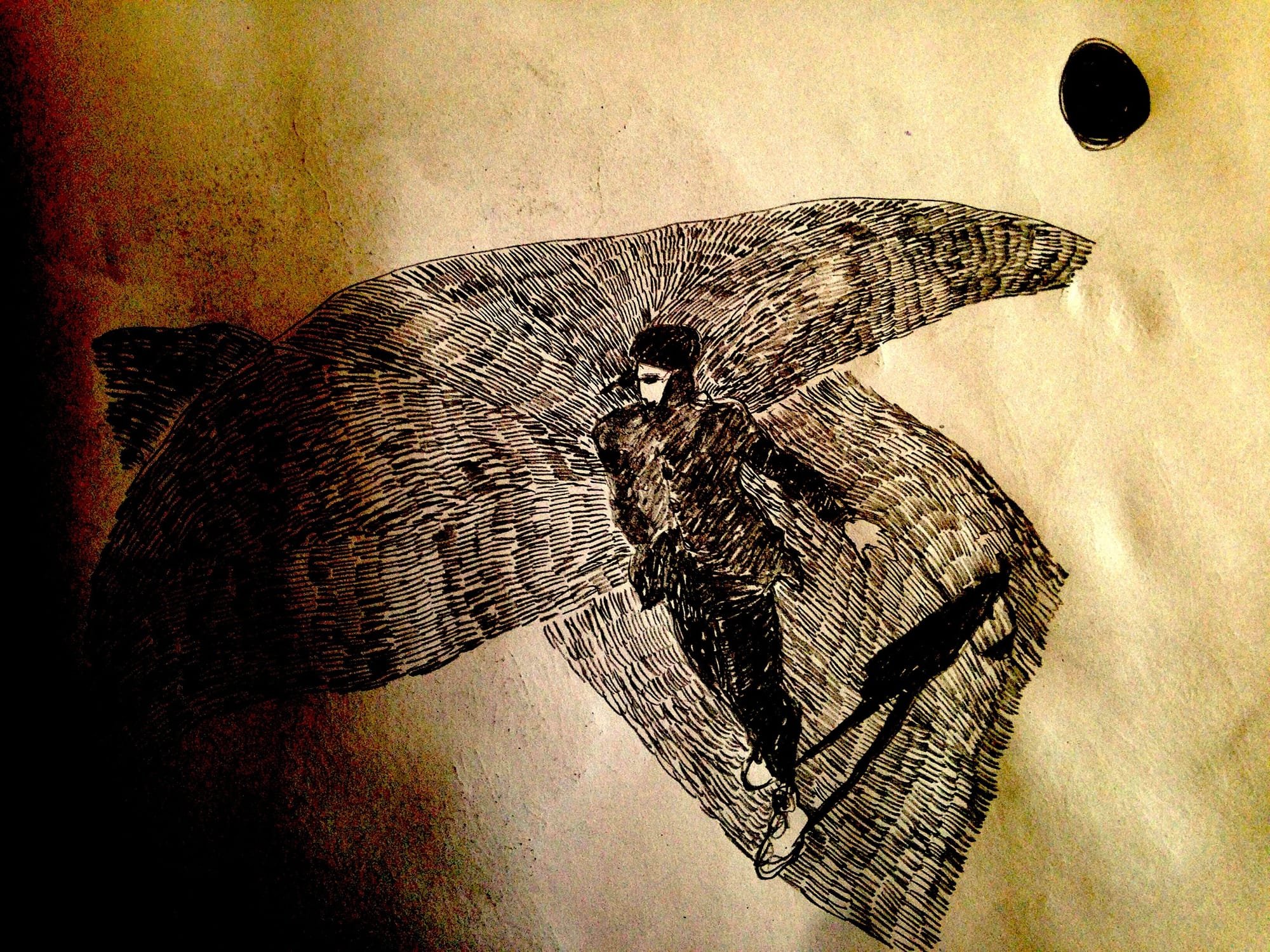 Never trust anyone who acts out of good motives. They always remain unsure.

He returns to the table in the summer light. The woman with the tumor in her head turns to see him, as if for the last time, acutely unaware of the significance. It is not inhumane. Illusion lurks inside itself. It’s a kind of comic leaping. Her interest was stationed in eternity and the kitchen. There’s a wary love of self-conscious over-hearing. Listen. Listen. Listen. Listen. Listen. Young Johnny experiences her reverie as sexual, verbal and polemical. The vitality is more than a scarecrows’.

She’ll have her world in her time. Her true pith abides in a spirit eloquent because she says – can say - so little. Her lewdness was a discreet uncanny nihilism. It is a wondrousness in the long terrifying foreground. Something beyond herself is invoked. Which perhaps withdraws each time. She is selling herself, her act. Every day is a last pattern of obsession that she regrets. She regrets she cannot buy herself back. We can never know where she was. Johnny supposed he saw the thing. He showed it to others as he felt it to exist. In spite of himself he was compelled to. His mind was only a type of dupe. Her bemused look was a glass case full of rags and bones and magical cravings.

Her head was killing her. And in her lips that moved Johnny saw zest returning dimly to the earth like a pile of gold coins under an oak. It was as if in this dreadful moment she would say from this time forth I never will speak word. Her illness seemed a preternatural intelligence in a new genre. Or an older one we’ve forgotten. Intelligence and understanding are no protection at all.

‘What is it?’ she seemed to ask, leaning across the table, across the kitchen’s green rug, even across her own length it seemed. It wasn’t quite a coherent gesture.

‘Is she alright?’ Johnny asked his mother. She looked at him curiously.

‘Don’t be silly. Keep your head well. It’s a help to me. For heaven’s sake, shall I wash you down?’ and it was as if she had never loathed her son more uncontrollably before that moment.

‘I don’t really think…’ Johnny laughed like a knife in chalk.

‘You’re filthy with stuff,’ snarled his mother to noone in particular.

Johnny looked at the woman whose stillness was now a fixture.

‘I would like to batter you with rocks’ thought Johnny.

‘I would like to watch her dying’ thought Johnny.

‘ I was wondering earlier,’ thought Johnny.

‘I am afraid of seeing her clearly without disguise,’ thought Johnny.

‘She is wicked. I am saying bitter things,’ thought Johnny.

‘I’d hate to see myself dissolve and slip like that, helpless and frantic and driven but unable to do anything but stop,’ thought Johnny.

‘She’s not really going to be hurt,’ thought Johnny.

‘She has done this before,’ said his mother.

‘I’m sorry, did I make a fool of myself. It’s probably because I am tired,’ said the stranger with the gin colored eyes. The room lifted as if for emphasis on a mumbled word. Sometimes to a breath it went on and on. Then it was a little laugh, breaking off suddenly in a little loosening. Sounds lull us. She seemed frozen as if by a horror that was nevertheless obscure and in the light.

‘Why is it dark? Why is it dark?’ she rolled her beautiful eyes. The mother and Johnny listened and listened. The mad sound of her voice drowned a wild sadness. It was as if a little child was crying somewhere in the woman’s body. Johnny imagined being that very child. Somewhere in the terrifying dark he’d be clenched, screaming into dark living bone. There are lonely places even in the warmest arrangements.

‘What it’s like,’ she explained, leaning across the patterns of the tablecloth, ‘is being buried alive.’

Johnny could hardly catch his own breath. It was impossible for anything more interior to be less scornful.

‘Are you sure you ought to be telling us?’ The mother’s voice was a circulating rise.

‘It’s a fatal illness you understand?’ persisted the women gravely.

Johnny knew this was a rare confession. It depressed him. The years ahead were likely to be eighty years of rubbish compared to this.

‘I repeat a word over and over apparently. But I don’t know. I never notice. It is my condition you see,’ she continued, both wry and elusively absent.

‘Ordinarily noone ever asks,’ added the mother and she stopped her hand as it moved to her throat and then covered her mouth.

‘What are you doing here?’ was what Johnny wanted to ask both of them.

‘What do you want?’ was another thing.

‘I’m lost and have a tendency for gibberish,’ giggled the woman childishly.

‘They repeat a word or thought over and over to make sure it comes across all right,’ his mother seemed to be explaining something for Johnny.

‘ She knows the difference between you and doesn’t care to be misled,’ she added with a stare.

Johnny shrank back as if he wanted nothing but the very weakest of introductions. He sensed that both these women were trying to avoid him at some level whilst at another they were keen for him to stay. He couldn’t begin to say why, nor if he was more receptive than he’s realized.

‘Don’t feel neglected,’ said the woman, ‘ we’ll bury you alive too,’ she smiled a long smile like a staircase without lamps.

Johnny stayed to the side of her mystery. The freezing looks, the waiting opportunities would all stir up over time but he knew right there that he hated them both. They are waiting for an opportunity to tell me their stories and free themselves from the burden of their sorrows by passing them to me, he thought bitterly. I shall save you the trouble, he added with affectation watching over his dumb solemnity. 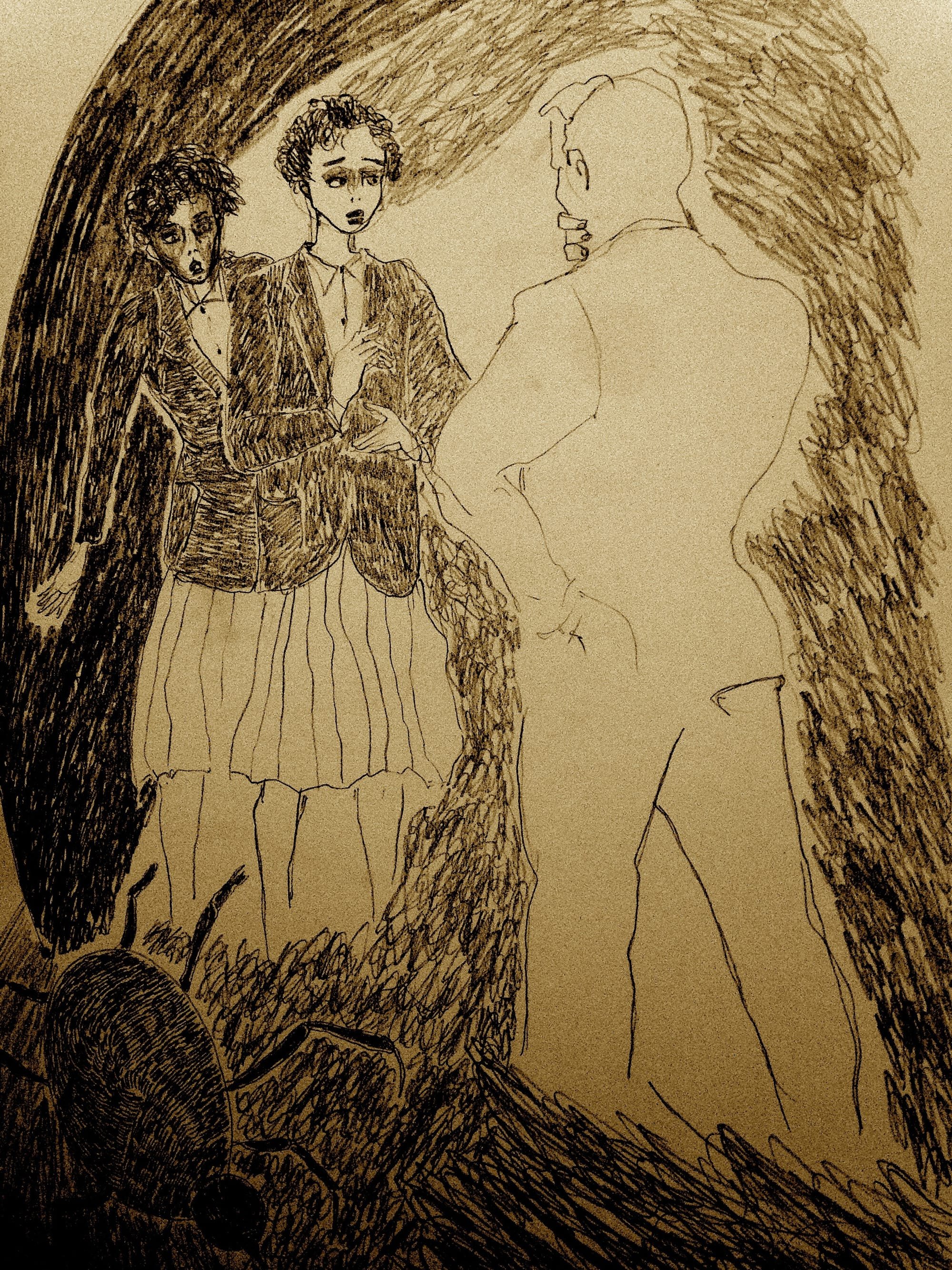