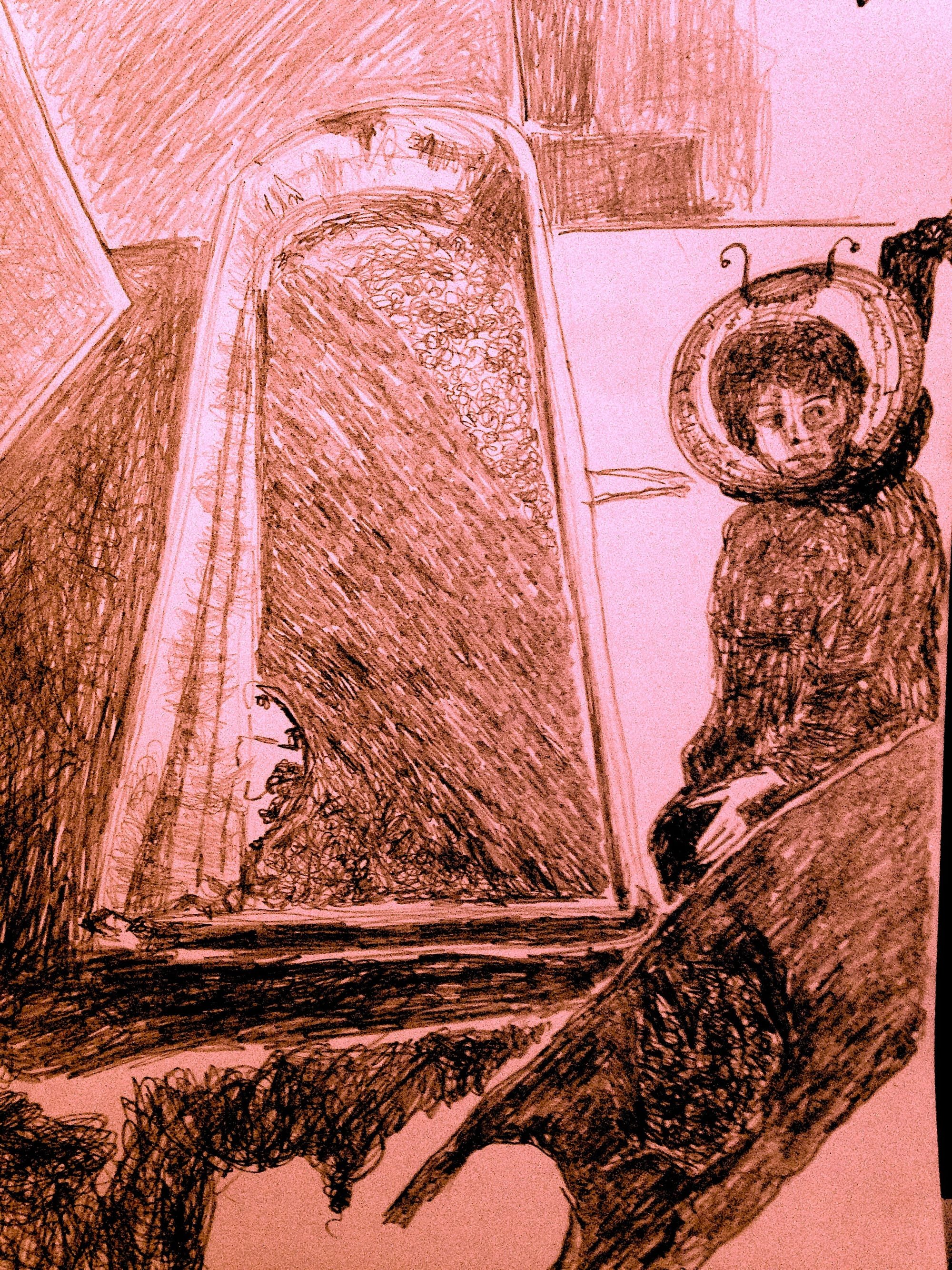 ‘ The seduction of a poet,’ she glared back at him, ‘ converts sordid blindfolds into blinding correlation.’

Johnny called her the poet from that day on. What the hell, she wanted a holy synthesis. Order, control, normalization, organization to cure us of our anguish…

‘... death doesn’t exist. It is punishment and damnation, an act pointing to exile,’ she wrote in a letter to him.

It was a relationship of one continuous free-flowing spatial form. It was the feeding source of fear. Her scanty clothing nourished anguish congealed by superstitions. She curved ribbons of sex and terror. Her rules of thumb? Become a totem or impose one. Take revenge or help. It ended when he recognized incandescence in her suffering.

‘ How would I know? She wasn’t confiding in me.’

‘The whole thing had a major fracture in it right from the start. It got worse. It was both our faults. I couldn’t stop nagging at myself and she couldn’t stop Taking my pulse for walks. I was a kind of tramp. Then she went on without me. I think in the end she was a corrupt woman. Why? Because she eventually stopped. But I’m not judging. It’s just pain and truth went hand in hand with her and her frank estrangements. She demanded less blunt and more design. There was much more involved than her marble floors, walls, bronze showcases, heavy rubber plants in corners.

'Her scale of sacred insight was a kind of somnambulence,’ he wrote.

She never believed he wanted rebirth on earth, birth without the mother. Perhaps all he wanted was a sanctuary with silence. He felt like a double parabolic, an old time vessel bulging out of the earth, his mouth exhaling and inhaling space.

He didn’t want to invade my shrine, she lamented. He wasn’t the brute I imagined.

There was always regret in that admission. She was the kind who rocked ever so slightly like an animal trembling to run. She looked older and thinner than herself. Her way always began in a double feature movie usually in the rain. Something fishy was always going on. She couldn’t adjust to anything after the beseeching, mournful pride had gone. What was the use of fouling up? She did a degree and left the country. It was a project she buried alive.

What is not all over? Freud’s wolf man feared he’d cut off his own finger. He carved into a walnut tree. Rebirth tore through his caul. Johnny wanted the opposite of that kind of return spell in the womb. But he hadn’t that ability. He was after the wrong sort of prey.

The blasted summer fields held geomagnetic contour lines running inland like internal compasses. From the middle of the brightest day the fields were alive with their scarred, scratched and damaged ghosts, psychedelic moleiro, with blunt snouts and weird antics. They surface for a brief glimpse above the yellowing wheat and then dive. Corvids scurry across the wide blue skies like black nails scratching. Then the bull Sperm whale shades the day with its nighttime shadow as it surfaces a recurring dream. Its flukes are banks of the dark against which no evil light can filter. The whale’s light is beyond ours, and shades down into utter blackness as if a blackness of space always stays still. In such dimensions fear is dispelled. Sperm whales are nomadic. Where they are is less important than why they are there. They’re matrilineal and the bulls travel far far far away from the females. They carry wounds and marks. They heal but one day they’ll be all used up.

Johnny understands this ability to be where the scavengers aren’t. The mysteries of fields and any shimmering summer heat were like corpses, placid and beautifully quiet, yet frightening nevertheless. 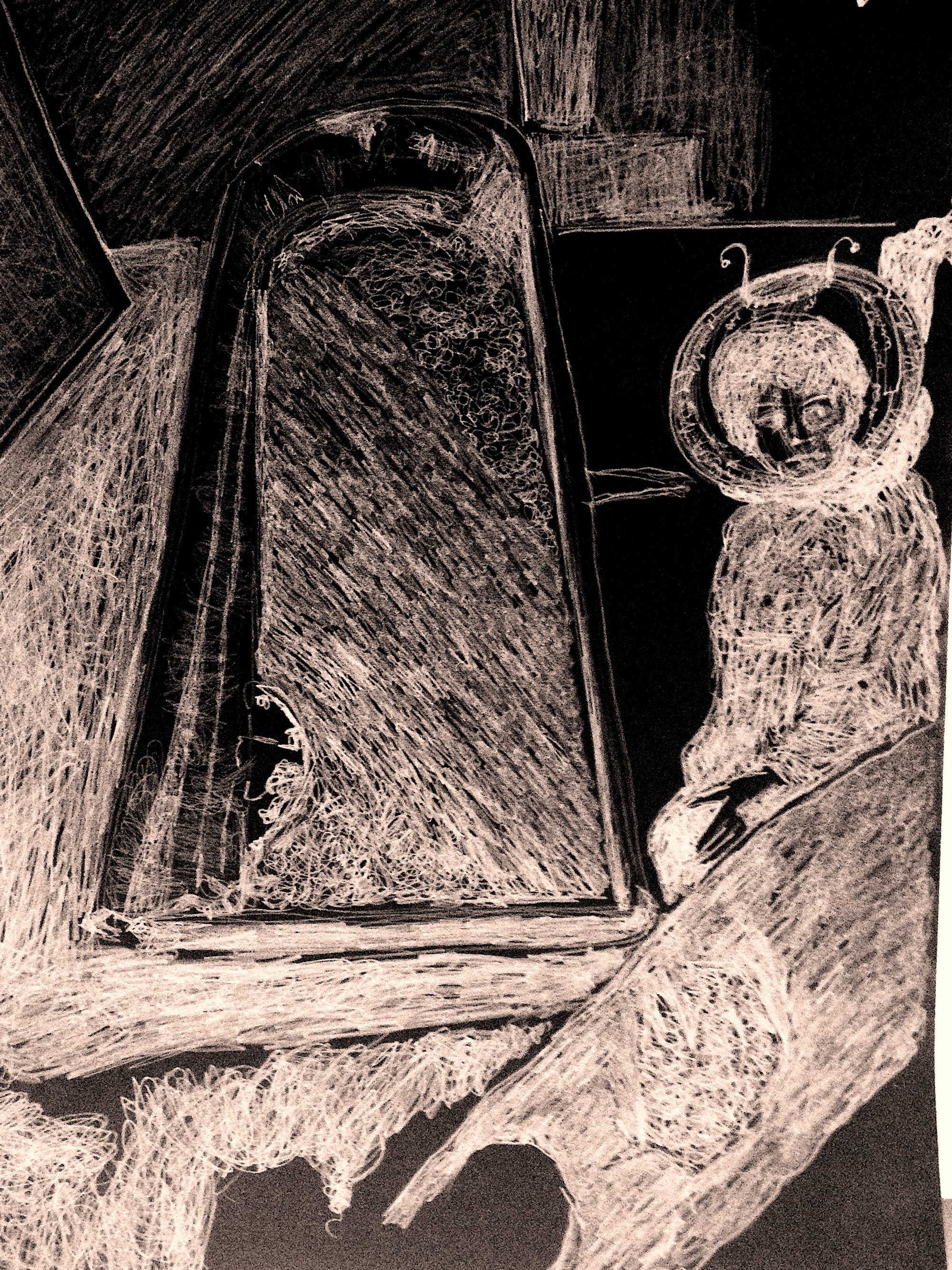