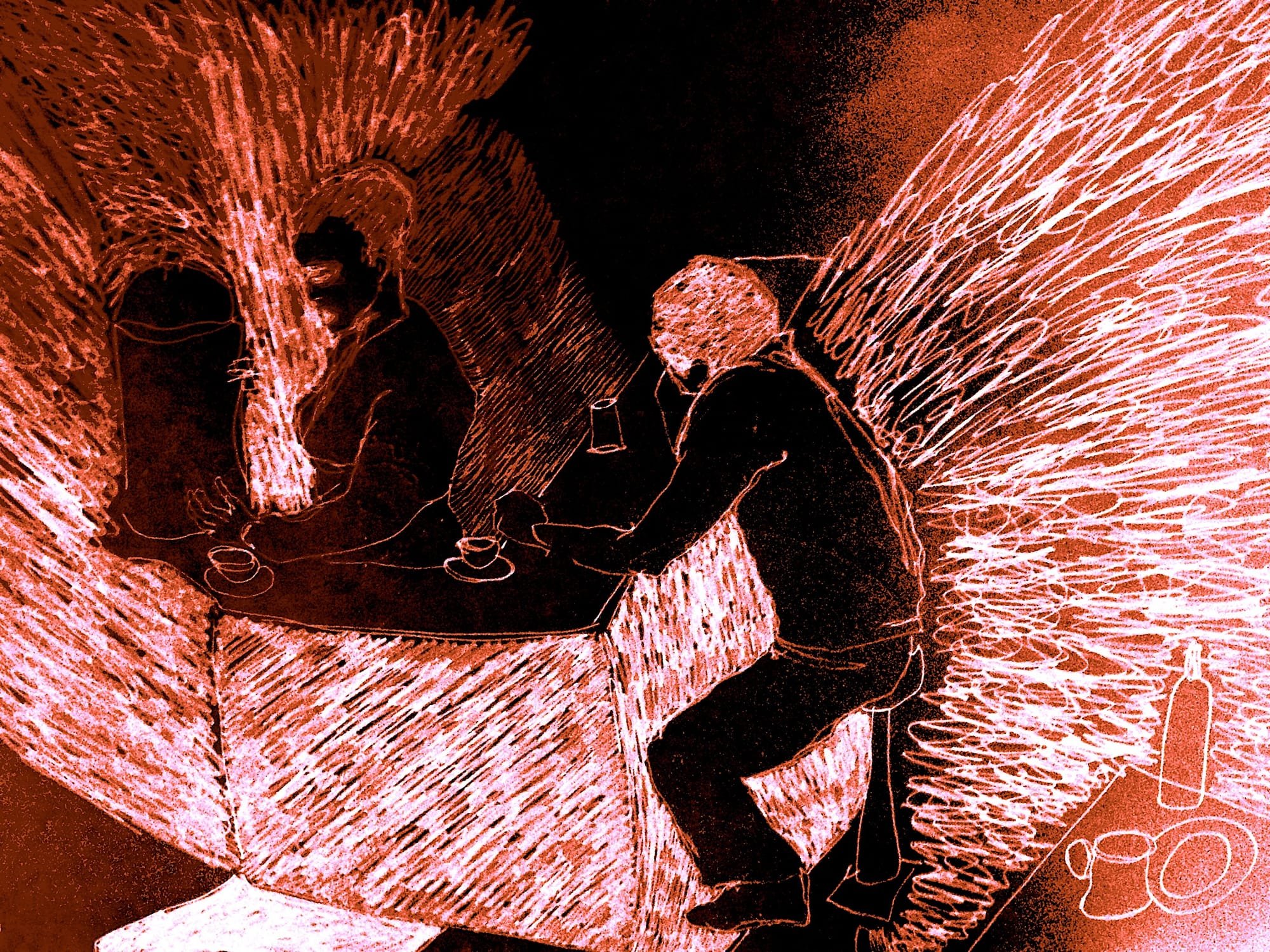 Johnny watched with interest as chips fall where they may.

‘I’ll always be fond of people I tempt,’ he thought.

He assumed – wrongly as it turned out – that he’d be able to condone anything. One girlfriend was a child when her sister’s marriage broke. When she finally wanted her own independence she got it but made mistakes. She lived as if she condemned a man she had known when really he was but a boy and disagreeably innocent. That should have been that. Instead, she hardened and was always looking for mistakes. That’s when she knew Johnny. She wanted him under. She gave him a dozen days of hell on earth and then fell foul of dirty rumours. It was all Johnny could do but to sit there and take it. She was implacable. She had firm hands and stray locks of black hair that fell across her face like twisted wire. Righteous certainty and guilty, dubious fear both got plied. He could talk a bird out of a tree but she brushed away his objections. Perhaps there were other witnesses, but he saw it coming. The accumulated energy, the sheer threat of violent tensions that seemed to be capable of continuing endlessly, required the necessity of memorizing and carrying down details. The active participation came across like she was berating her own voice. There was a need for even the most feeble recall.

It was activity with a solid line and a speed limit. Her fist and oblivious cleavage dangled like promises. Her scowls and buck smoke expected pristine responses. She was maybe from Krems in Austria. What was that? Origins are worn like an invisible harness. Every conversation was practically a brawl. Her heart kicked against his. Let her do the talking thought Johnny, exhausted and annulled. Her vibrating hips were not doing him a hell of good. He wondered about this downing vodka after vodka with naïve looks from the outside of culture. He heard of others at the time talking about ‘magnificent sex’ . He kept drinking from mini bars and adopted a serious tone, looking for serious consequences. He couldn’t afford to find his memories in the arms of this one. He knew his limits were less signs cropping up than a sixty mile radius. He filled up on white bread and margarine and covered bruises with quince spread. All you can do in such circumstances is crawl down the hole and pull the hole in after you. He always appeared to be listening. She sometimes wore a blouse. Other times a cardigan. Other times a skirt. She hid nothing under the mat or pillow. Even if she was guilty there was no proof. Johnny couldn’t have retained her. He was never inclined to accuse her either. The noise wasn’t too bad. The warmth was intoxicating. He valued the encounters as men in the past valued their souls. It was a strange weight that pressed him down. Passions are usually breakable reeds. This one was more guarded and seasonal. She looked at him with complex irony, unembarrassed by his condition and her complicity in it.

‘I’m a little surprised that you’d go all the way with me,’ she confessed and yet there was a note of complaint in her voice.

‘Then I’ll just sit here,’ he smiled carefully, always knowing it was safer to cheat.

‘You’ll go away in the middle,’ she said, assessing him. Johnny seemed to be the one who could do that and yet come back.

‘You’re the kind who sees through yourself,’ she said, without really taking ownership of the words. She took it for granted that he was tied up in denials that reached way way back. There was no need to think she wanted much else from him because, to be frank, she saw he was merely an implied relationship at best.

'Sensuality can be ruined if you don’t pace it right. You have to be careful not to shrink everything so that exhaustion isn’t desperate and gorgeous but just ridiculous.' Johnny sounded formal and locked. What’s she doing now? A Masters degree from Chicago but no full qualifications. French and German, plus counselling duties at a low salary and a divorce that meant she had options, few words and psychoneuorotic diligence. Lastly, Johnny knew she was at a desk reading a paperback with dark-rimmed spectacles and a sequence of used up spaces trailing her. Her rubber-souled shoes were as quiet and close as spiders.

‘Can I come back with you?’

‘Coming where with me?’ she had asked blankly.

Johnny had felt summer ending as another little nightmare.

‘I never wanted to be anywhere,’ he thought to himself, his heart a child’s done in cross-stitch, under glass in the drawing room. He felt he was a hollow tree.

‘You aren’t listening,’ he finally said to her. She had laughed like a slashing cane. She was never gentle . She was restless. She struck out at the bosomy women, their wide backsides, the sugared Easter and stair-railed filthy iridescent candy yellow glass of spring morning sun-blaze, fighting a mad fight for an insane version of herself that was getting ready to disembody, like a spirit talking itself into a long, fifty mile rise flight after thirty years floating on the highway between Pacific Point and San Diego.

‘Is that right?’ Johnny was wry and impressed as if he was about to issue a warrant.

A face creates more. It hides nakedness. Its judgment reaches out for the evidence of its words and deeds. Fear requires the fear of others. Desire the desire of others. With Johnny his failed promise was a sallow mask overlaying another, harder one. After a while the very idea of a face as a mask becomes absurd, like wondering about a true essence. Nakedness then is just an answer to whether there’s anything more to add to the file. It’s amusing but childish. Johnny never felt the nakedness of others intriguing. It gave too few clues. He relished instead the overwrought nerves of personal histories, deceptions, convoluted mesmeric verbal lines. He cherished the different kinds of shame that invaded the small damages people suffer. People were so often just small damaged things.

Most situations are too humiliating, too distressing for truth. The gap between the vulgarities of life and the  ideals of the imagination is a vast gulf which can’t be broached. The logic of late Dylan and Tarkovsky's Stalker , of course, suggests otherwise. It tempts approval or disapproval.

Life confounds both with rules set by plutocrats and policemen. Tech giants and terra data. 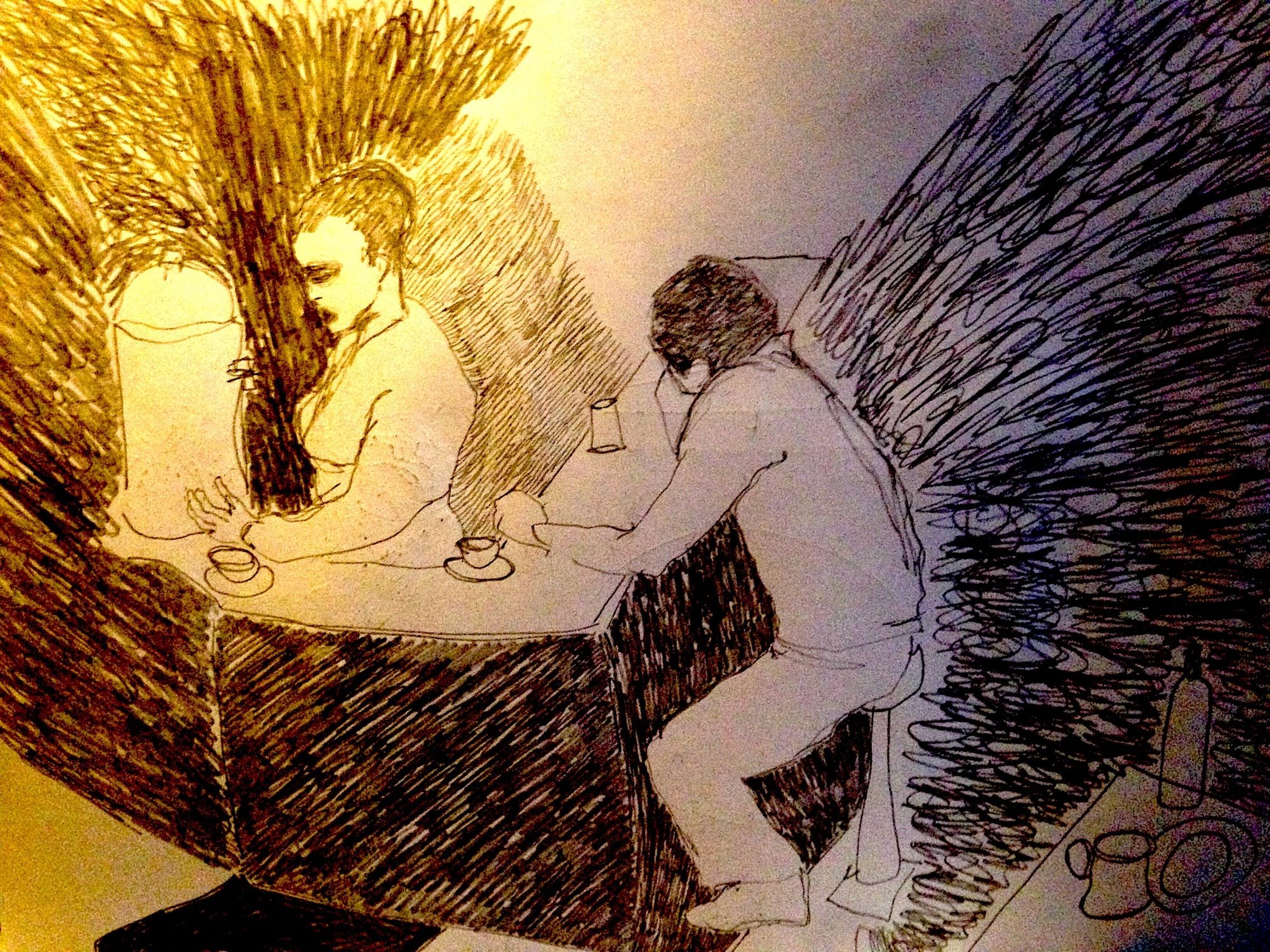