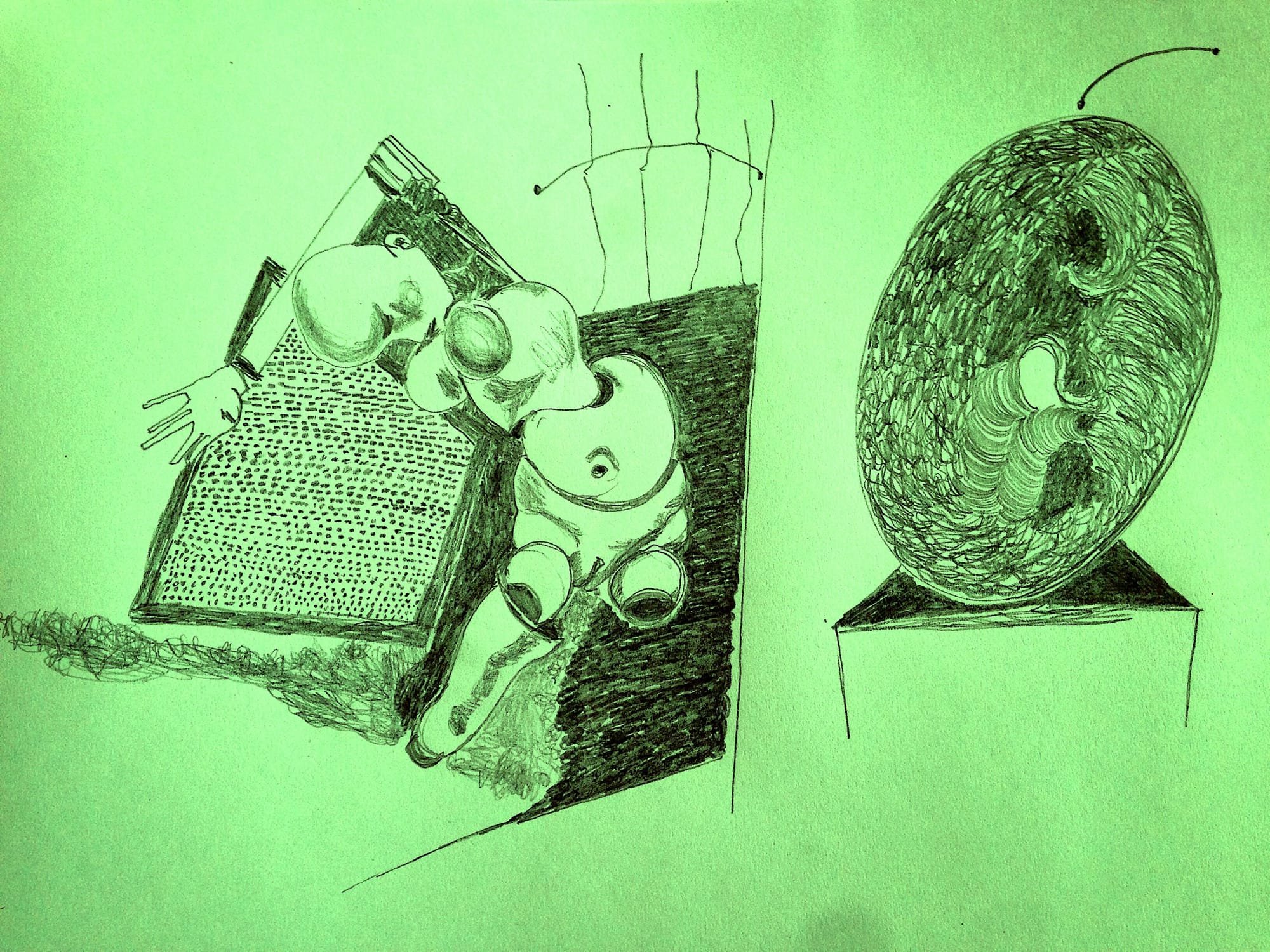 So many opposites. So many come. Before the separation everything was together. There wasn’t even any colour. The mixture prevented it. There was much earth present. Seeds were unlimited. Wet and dry, hot and cold, bright and dark, stuff and seeds. Where did his hair come from? How did he apply himself to flesh ? There are so many things that are unspecified. Between the bare substratum of the window ledge and the magnitudes of chicken wire is the stripping away. All that’s left are powers. There are no abstracts, universals or forms. The view from the window to the shore and then the wide blue horizon happens before Aristotle. There is a share of everything in everything. Fairy shadows play in the glen. There are different proportions.

Otis Redding provides the soundtrack . ‘I’ve been loving you too long to stop now. You were tired and your love is growing cold. My love is growing stronger as our affair grows old.’ That voice of Otis is a little golden. It’s unlimited in its divisions. It’s like seawater of certain proportions.

What was it that we gave Johnny his freedom to do? Can it still it be after all this time his first motive? Does it even want him back? Well he’s sitting at the counter ordering a cup of coffee. And closing his eyes. Perhaps to dream that things are really going his way. And it’s only then that he mixes. Back to the beginning of the dream. Foul cold ushers in a variety of mysteries. The sand box experiment, discrete murder, a message saying that something is missing. If there’s going to be a reprieve there needs to be mystery. Isn’t that right? Everything follows the rules. Once these mysteries are established we’ll return. And then he saw the white house.

It has long been accepted that this is a harbinger of death. Or of fury. Or that it’s a representation of drug use. Or some other crazy thing. The connection to the pale house that death haunts is the easiest connection though not quite accurate. The pale house is named as a house in dead town. Woe to the ones that go inside. Or try and leave.

A model white house sits inside the white house. It’s on the fireplace in its living room. But there are many white house references. The first time is during Reegan’s nights with his wife after she’s been drugged. This is where the drug theorists get the idea that the house stands for death and also drug use. The rest of the house cameos don’t have much to do with drugs or death. There’s a plastic toy white house in front of a coffee shop. There’s a reference to a house in the name of Sherlock Homes, Johnny’s favorite detective. And houses remain infamous throughout because of the dream house. It’s this that holds the one true definitive answer to our question. What does the white house represent?

The house is the white of the teeth of the eating stranger. And windows show our dark within. When you see the white of the teeth they’re biting. When we see the white house something evil is happening. The white house represents eating the other way. It’s the mouth of hell. And the darkness is what we allow when we go to hell. What’s the key feature of the evil doppleganger haunting Johnny? Big teeth. Too big for the mouth. Dark hole. An actual hole where the rest spirals down. Everyone has this evil opening. It's outside and then inside. The capacity to do evil gives the capacity for balance. Before this, the mother’s only function as a character was to give birth. She allows abuse and then sits by. There’s no way she could have lived in that house without knowing the abuse was going on. Even if she was being drugged. She looks the other way. We see the end result of this willingness to go along with evil in the house. We catch a glimpse of the evil that now wears her character as a mouth. Her son smiles out from behind a black wedding ring indicating that the guilt of looking away has turned her soul black. White of the biting teeth, all gullet dark behind them. Johnny becomes at least an accessory. All this is an extension of primitive behaviour. It's an instinct resting content without imagination.

Not even Ovid had it this bad. Hunger takes over any attempt at fantasy. Hokum is long and tall and then falls over. Sleep isn't the little death it used to promise. It's just a break from humiliating self-descriptions. Rooms become too small. Or consolations for this contained rage. What do we have if we have a pain? And what would be the proof?

In the kitchen someone had written on the wall next to the pantry.

'But it's a crazy message,' thought Johnny. Then he said it.

'You think I want to see my name scribbled on the wall? I don't like being singled out.' Maybe he wrote it himself. Maybe the writing had to know his name. Maybe it had to draw attention to himself like that. After all, a name replaces you. It is always shaky ground. It takes you out of the fold. It drops the temperature a degree or more. 'I can't picture a world,' he admitted to himself.  He felt utterly.

'Who was here eating the other day?' he casually asked. That had been years before. When time had been marooned. When the strangers were boneless. Some people don't belong indoors. She had eyes the colour of gin. Her neck was tight. Her head the very far side of the moon. She clenched her hands round knife and fork as if a dubious excuse. Her whole body had a faint lying sheen. Johnny didn't understand it. His mother had sat opposite this woman, with a lemonade and just a manner of speaking. The conversation was tilted. The stranger often repeated her own phrases as if she had forgotten. It was as if she wasn't there in person. His mother's eyes were like unexpected birds in a ruin. The long silences were like engines had died. The stranger had dirty tennis shoes on.

'This is a friend I first knew years ago,' his mother turned to Johnny, still a child at this point. Her smile was something she'd misplaced. Johnny stared back at the face of the stranger. She had a finely chiseled face. Her core was iceberg cold, green and blazing with something vast underneath. An ageless type without a concesson to glamour anywhere.

'Are you ill?' Johnny had asked the stranger. His mother had a forged look after that. And a sudden need. There was something inside this deception that wasn't wrong.

'Please, I just have bad headaches sometimes,' smiled the stranger. A dark uncertain glance slid as if it never wanted to take Johnny in.

'Looking for someone?' asked his mother. Johnny frowned.

'Aren't you kidding me a little?'

It was one of those mutually suspicious times. Everyone leaves feeling disappointed. There's the sardonic memory of a post mortum. Spreading ruin is a kind of speciality. Every solitary day is a kind of delay. What was passing was a narrow escape. He was mortally afraid of being too young. That was then. And now seemed just a matter of contrast. Time struck him as an offshore fog pushing into land, covering everything with grey iridescence.