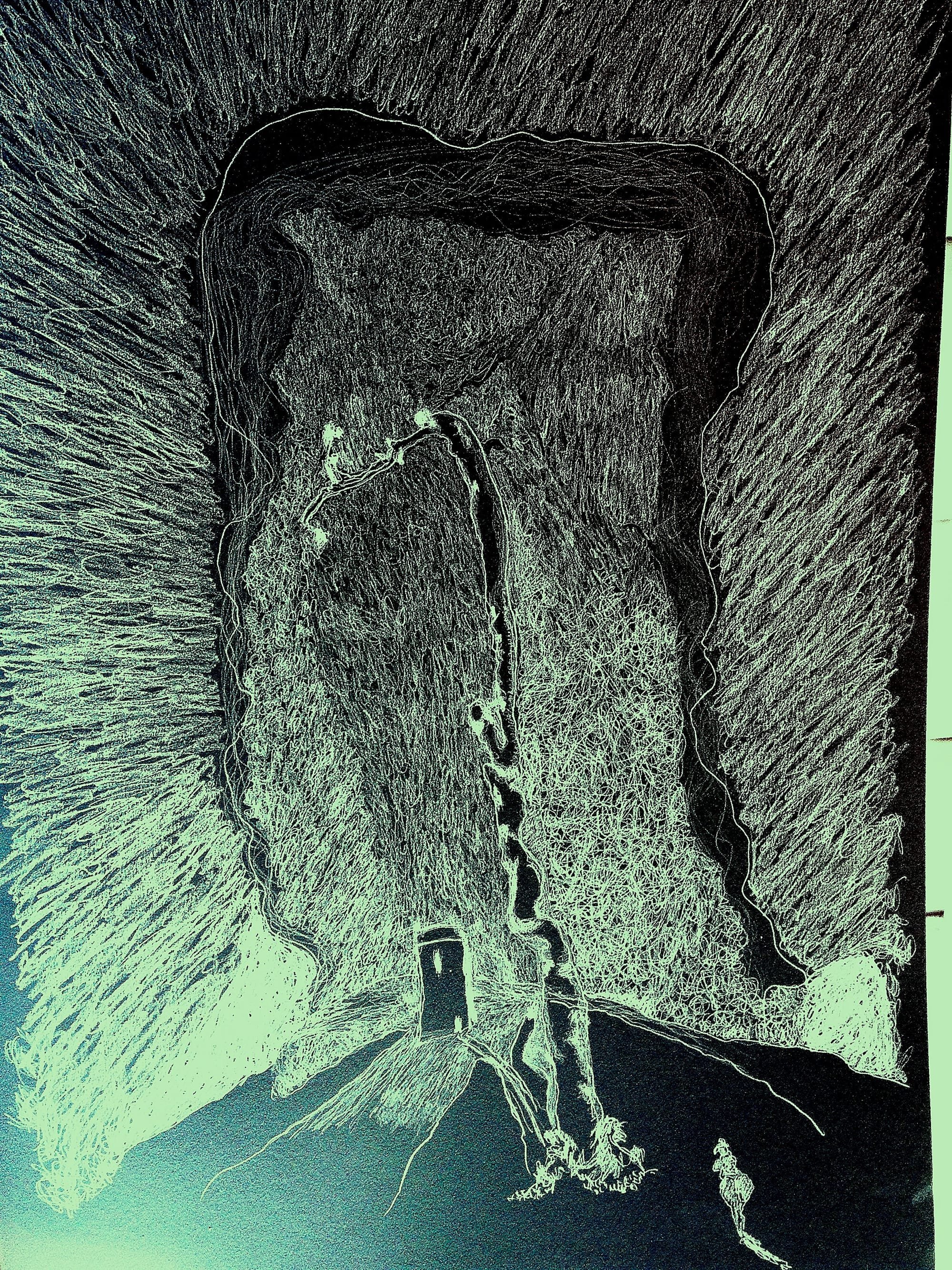 An advanced civilisation shouldn’t be barbaric.

‘A billion dark trees gone mad under a rimless sky,’ comments Johnny. He is seeking the negative entropic. Suck orderliness up out of art. Schrodinger’s ‘astonishing gift of concentrating a stream of order on itself and thus escaping the decay into atomic chaos – of drinking orderliness’ is beauty.

In the slow tight lanes he watched light like it was thin copper wire. He was a hot system. He was scared of the small but lively demons, doorkeepers with microscopic eyes and diminutive agile fingers. Who wouldn’t be? They were intelligent and exceedingly quick, like a pointsman on a railway, or a valve in an hydraulic ram. Johnny ran the gauntlet from house front door to road and world each day with the weaving motion of a sly loom. In light he saw the cunning patterns of fertilization. His famous chant ‘engulf the egg, engulf the egg’ was probably begun at this time. A speckled hen, a fly, maize plant, rhododendron, beetle, mouse or neighbour were distressed inscriptions in nature. Everything was uneasy. Every bit of everything was hanging about, part of the make-up if not the character. There are moments when he strides out of quotidian reality. It is less a backdrop and more a constant drone lending him authority over what happens next. Even when nothing actually does.

His early moments of adaptation push him past any impasse. He veered towards being tense, pokerfaced and telepathic. If he handed over a tradition it was one he was constantly stealing. There was a strong feeling of exile in him, but not wandering. Forced from home didn’t mean he left it. If he was in constant motion it was a matter of assiduously going nowhere. If there was a space for him it was a science fiction space with an attached hobo. Nothing seemed all that far back and the future was a voice in a VR. His language had something to do with the causes and ideals of circumstances and blood. When he misplaced verb tenses he did it as a kind of collage. When his plurals mixed with singulars the pose was another hippy shake. His venture was to do the alienating effect, suggesting more was going on than you could ever know. He might not have realized it at first but this was never going to be friendly. There’s no playacting but rather a marginality. It loads up everything he says. He doesn’t ventriloquise so much as cross borderlines whilst standing on the spot. He’s already been somewhere where he’ll need to be remembered. There’s a constant uncanny fulfillment of failed love. He loses what he never had but mourns it with the passion of a claustrophobic rewrite. 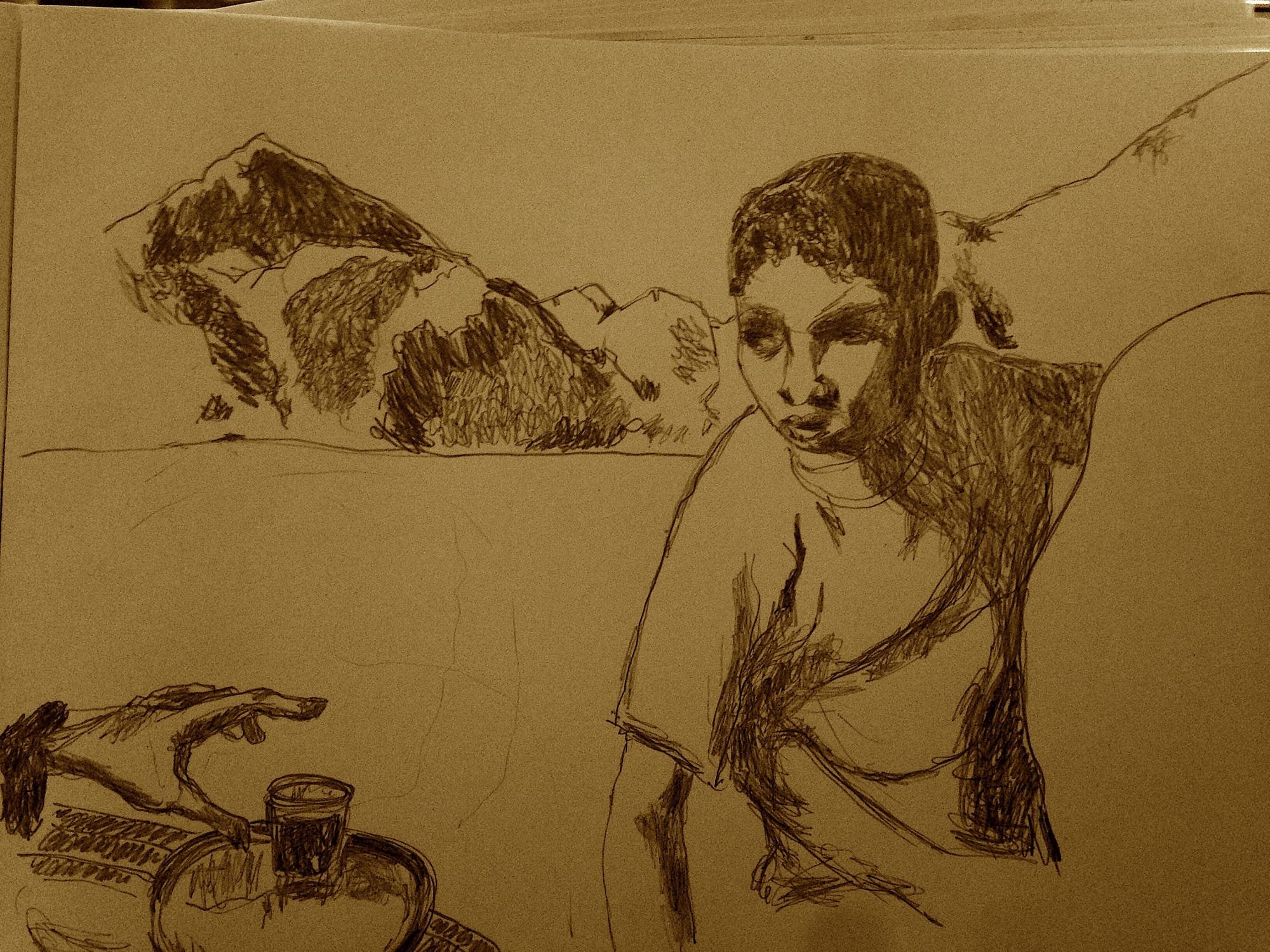 What difference did it make? A kind of spatial contingency making allowances for the fictions of movement. There was an aura of mobility that was better than walking. There are two sides to the same coin, a comical state of affairs. The edge gives it three, and then it’s tragically disorientating. The edge makes the object something else, a moment of rest where everything else becomes temporary. His unscrupulous imagination often lands on the downside of a wish. He rarely knows what to say but can talk underneath a melody so that all we get is an emotional dilemma. It’s always like a half-remembered rhyme disappearing. A girl he once knew saw the relationship as a hybrid. ‘He was more a protest than a lover. He was a kind of shell acting like a cannonball.’

If there was an erotic tension it was more driver’s lash than integration. One night, with many thousands gone, intimacy was not so much hinted at than a nocturnal vault. She wanted to free him. He wanted concealment and lockdown. Somehow, in moonlight, the private tragedy was a cosmic disaster. It’s distance turned it into a quick-hearted farce with growing wings. The places he went to were obscure and everyday. Well, that’s everywhere these days. Nothing emerged naturally but was rather a commentary with abbreviated supertitles. Sometimes all he could tolerate was telling people what to do. It was at a point where he didn’t have a clue what to explain and so simply performs a line of gestures. Soon after this he’s finding an argument with the consistency of fate. In hedgerows he suspects doubles are lurking. He’s looking to compete with them. He never wants to be the same as you. Or himself.

He walked in an absolutely modern way. He made himself available to all his senses and all his landscapes to salute beauty. He was as likely to quote Rimbaud as wash: ‘ The new hour is at least very severe’. There was radiated confidence or despair in his hand gel. Let’s face it, what you’d see behind his eyes was Proust’s Madeleine, the green light at the end of Daisy Buchanan’s pier, Dylan’s chimes of freedom. Everything’s liminal even when done with beer. If sorrow twists round him, it’s artificial as hell. He’s in pieces of sorts, explaining why when reciting Rimbaud he does so without contraction:

‘To each being it seemed to me that several other lives were due. This gentleman doesn’t know what he is doing. He is an angel. This family is a litter of dogs. In front of several men, I talked out loud with one moment of one of their other lives… too bad for the wood that finds itself a violin… If brass wakes up a trumpet, it isn’t to blame.’

Whatever he decided to do was beyond our ken. If there was some kind of breakdown it was of his own as well as other’s masks, legions and hallucinations. In autumn evenings they’d light fields and the sky would be filled with fire and smoke. It looked like it wore a crimson black veil. These nights would be like visions temporally opening up secrets. All he could do was accuse them. 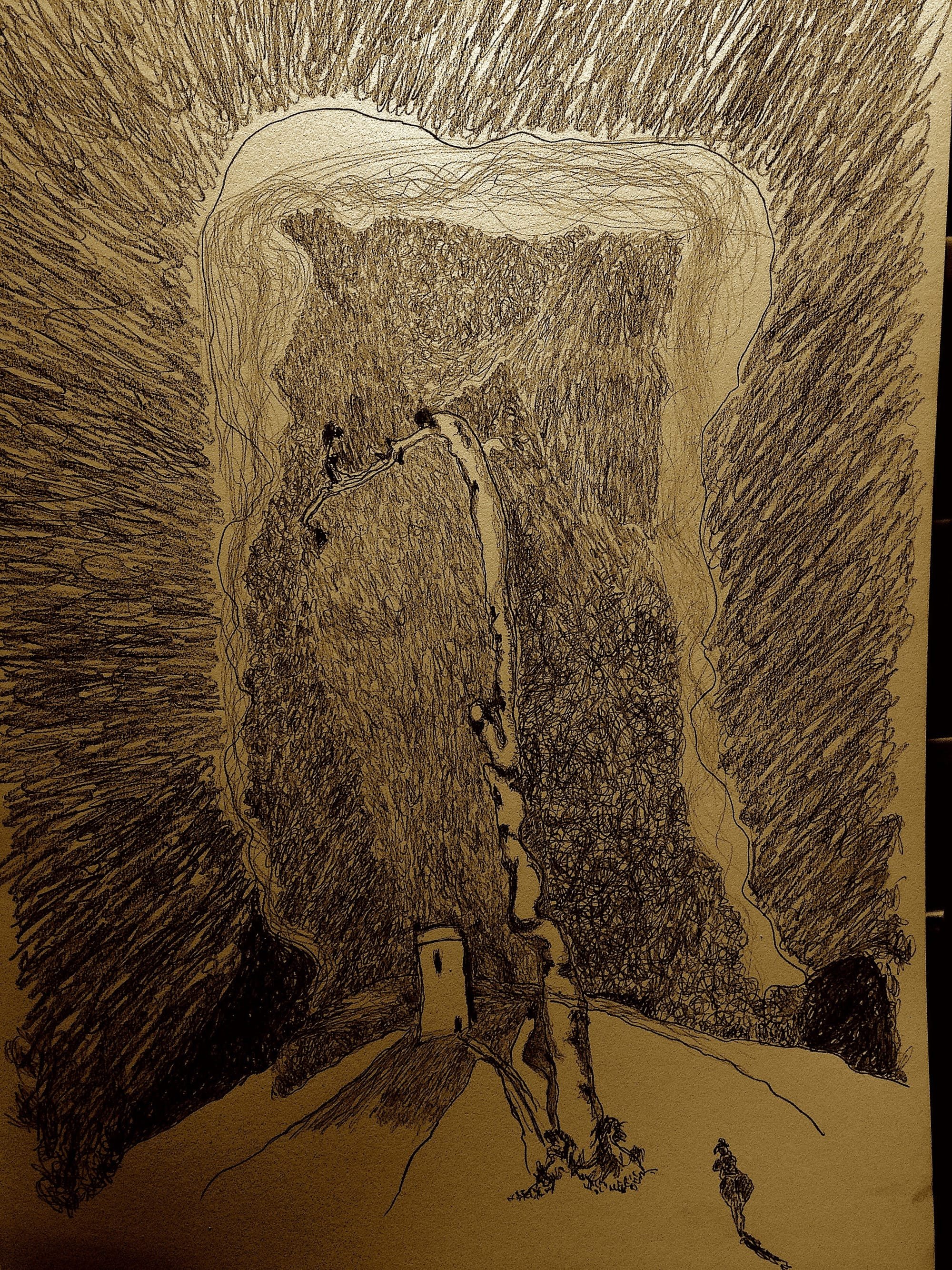